Posted by Chaya on

If Each Nice Girl Took a Pen

It’s how I edge my way into the world rather than be erased and excluded, which would have happened if I went with the tide and never picked up a pen or feather or stick or bow, shell or rock or remnant bone. 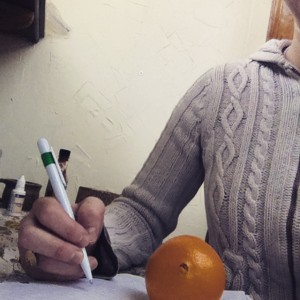 Yet- our world is built on the assumption of nice girls. We all rely on nice girls, especially “great men” and to give a nice girl a pen, or penal instrument, is to topple the empty boxes these men stand upon, so to pick up a pen as a nice girl, is much more powerful resistance than you might think.

You may move slowly and subtly away from being a nice girl, so slowly and non-confrontationally that you may even still be thought of as a nice girl (by some), but you will know your own secret. You aren’t-absolutely not, and in fact there was never a nice girl in you, not at all.

So you cling to your pen, pine for it when lost out there in nice girl land, cleverly disguised as the land of great men. For now you have a pen, and this pen has never failed you, not even once, in your quest to be the non-nice girl real you.

It has run out of ink, but you’ve quickly found another one as those times and you’ll always find more paper because that’s what not-nice girls do. We are greedy and selfish; we know what we need and we claim it. The quietest knowings are the most powerful ones. We are so loud in our own bodies and hearts for we know so well what we are not, and this will never change.

Every breath we take is not a nice girl anymore breath.

We also snicker inside as the great men who built their empires on our backs and dusted off their boots on us trip over their steps when we have our pens in our hands.

We love it, not because we are such mean girls (though we may be) but because we love that as we write the whole world changes around us, and our reality is no longer the oppressing, depressing one it once was. 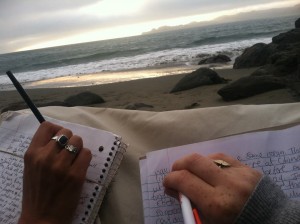 We love that we can claim our seat anywhere and say anything and no one can stop us once we decide we aren’t nice girls. Once we decide this in our own hearts, we become things that have never been alive before (ourselves!!!) and we smile these great smiles that are so cellular, so the very opposite of nice girl smiles and are in fact the smiles of our liberated parts. So they aren’t big wide smiles, but they are smiles we can’t hold back; we can’t pretend we aren’t a little happy.

Eventually bigger smiles fill our faces because we waited for them, because we took a pen and told ourselves, if no one else, day after day what was true for us. And after many years the evidence was in: we were never nice girls; we never woke up and wanted to be nice girls.

We always woke up with a resistance; we had a mission every day, and it was something real. We knew that even if those around us didn’t recognize it. We recognized ourselves; we said to ourselves, “You have something to say, and my first job is to say it with you.

Me and a pen, that’s two. A woman and a pen is this outspoken team that can go anywhere and do anything, and the more of these teams we have, the better.

These are the marriages that can shift us from families of nice girls and great men, good wives and good boys, to overhaul, to these real smiles, a few of us know about so far.